Well… I should use “proof” in quotes, but the simulations below should show that we will always have some “sticky” segments which survive many generations. Technically, I suppose, a “sticky segment” is one that is passed from one ancestor to another intact. However, “sticky” is usually used in the sense of segments which pass through many generations, intact.

Here are the ground-rules I used for this analysis:

So apply these rules to the 200cM chromosome in the figure below. 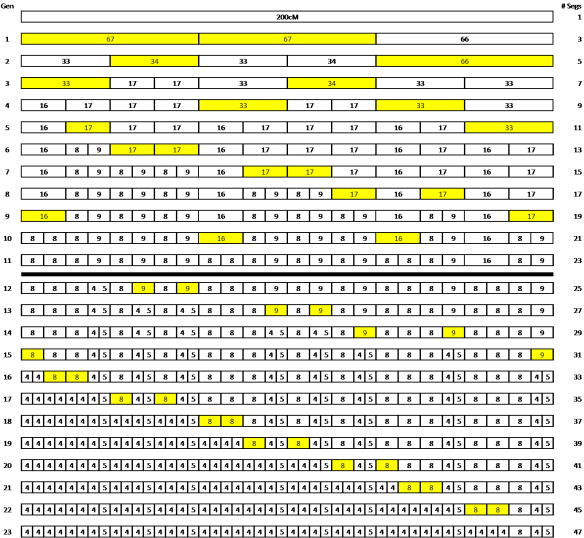 Note the first two crossovers subdivide the segment into roughly three equal segments. As outlined in Rule 3 above, the center segment will really be from a different ancestor, but for the purpose of following the subdivision of segments in general, we will continue with all the segments – on average this gives the same result as far as subdivided segment sizes go. Note: the segment which are subdivided are highlighted in yellow.

After generation 11, our process starts to subdivide some segments into segments so small that they would not show up as a shared segment – they are below the standard thresholds (about 7cM) for a match. But notice in generations 12 through 22, that there are still above-threshold segments. Even in generation 23 there is still an 8cM segment which has survived intact for 14 generations! Remember: if this particular segment had been subdivided, then some other segment would have not been subdivided.

The point is we should expect “sticky” ancestral segments. Particularly in the 7-10cM range. They are actually quite common. Even “sticky” segments in the 10-20cM range are usual, even after 7-10 generations.

Now, we have not studied the probability of matches at these great distances – that’s a different, somewhat harder, discussion. The point here is that there are many “sticky” segments in our DNA. They may come from generations that are generally way beyond our genealogies. Also we should not be surprised when we see a parent and child with essentially the same 7-10cM segment being shared with a Match. It happens pretty frequently with close relatives.

Here is another example based on a 100cM chromosome (think chromosomes 19-22). For this chromosome there is only an average of one crossover per generation – only one segment will be subdivided in each generation. I tried to place them more randomly this time [you can easily try your own pencil & paper sketch of this simulation]. I generally picked on the largest segment. After 11 generations over half of the segments are still over the (7cM) threshold. And several segments 10cM or over have survived, intact, for a number of generations.

6 thoughts on “Proof of Sticky Segments”

This site uses Akismet to reduce spam. Learn how your comment data is processed.